The Cost of Forgiveness 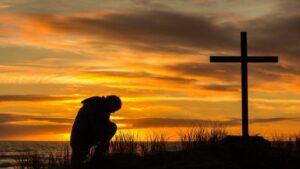 “In fact, the law requires that nearly everything be cleansed with blood, and without the shedding of blood there is no forgiveness.” (Hebrews 9:22)

Why is there no forgiveness possible with God without the shedding of blood? Why cannot God forgive us like how we forgive each other?

Just yesterday at the Oscars, actor Will Smith publicly slapped Chris Rock for saying a joke about his wife. Chris declined to press any further charges against Will for assault although it was witnessed by all the world. Why can’t God forgive in the same way as Chris and let go of all our offences?

The best way I can think of explaining is in terms of crime. An offence has been committed against the state and the community of people within the state that is greater than just an individual’s suffering. And justice has to be served for the sake of the whole community. This is why the offender has to be punished even though the victim may have forgiven the perpetrator.

In the same way, God, being the holy and just God who sustains the whole creation by his righteousness, is offended by sin in a deep way. All of our sins against one another are ultimately against Him because we are made in His image and live under His rule. He cannot simply ignore or cover up our sinful acts because every sin is a rebellion against Him.

Which is why Jesus, the perfect Son of God, had to come to earth and die as a sacrifice for our sins. This is the only way for us to be forgiven and be reconciled to God. Someone had to pay the price for our sins!

So the next time we pray and ask for forgiveness of our sins from God, know that it cost God a great deal to make forgiveness possible. And may that put how we need to constantly reject sin and be continually thankful towards God for our salvation in the right context!

May the Spirit guide us right living today🙏