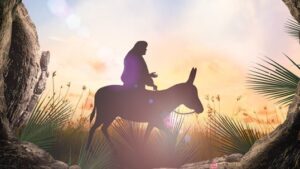 “Rejoice greatly, Daughter Zion!
Shout, Daughter Jerusalem!
See, your king comes to you,
righteous and victorious,
lowly and riding on a donkey,
on a colt, the foal of a donkey.”
(Zechariah 9:9)

Have you ever experienced mixed feelings?

I experienced it when I heard of the passing of Canon James Wong. He had been my pastor ever since I became a Christian as a young child. I learnt in my faith from his teachings and preaching. He had also baptised and married me. And his final service was the Vicar’s Induction Service at COA.

Yet even though I am sad, I rejoice to know that he is “at home with the Lod” (2 Cor 5:8). This is far better than anything this world can offer. It is a bittersweet feeling.

Our Lord Jesus felt this at this day 2000 years ago. Riding on a donkey into Jerusalem, he must have rejoiced when the large crowd welcomed him crying out: “Hosanna to the Son of David! Blessed is he who comes in the name of the Lord!” (Matt 21:9) Finally his ministry is recognised and his efforts vindicated!

Things were not that simple however.

Jesus’ entry into Jerusalem also marks his death. A few days later he would face the betrayal from one of his own, be abandoned by all his disciples at his trial, be falsely accused by the leaders of the Jewish people and finally be crucified on the cross by the Roman soldiers. Most of all, he will drink fully the cup of God’s wrath at his sacrifice.

He must have been experiencing a mixed bittersweet feeling when entering Jerusalem – one more extreme than what any one of us has ever felt!

Yet he did not allow his feelings to deter his decision to accomplish God’s will. He “resolutely set his face towards Jerusalem” (Luke 9:51) and refused to let any well-meaning advice or threats dissuade him from God’s purpose for him.

As we celebrate Palm Sunday today, let us also be aware of the full conflict of emotions that our Lord felt within his heart. More than that, let us also like our Lord, be determined to follow God’s will for us however we feel and at whatever the cost. This is the path that leads to life!

Have a blessed day of worship🙏