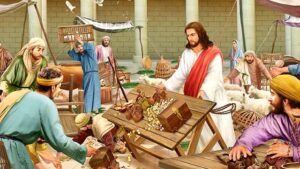 Jesus entered the temple courts and drove out all who were buying and selling there. He overturned the tables of the money changers and the benches of those selling doves. “It is written,” he said to them, “‘My house will be called a house of prayer,’ but you are making it ‘a den of robbers.’”

“Seeing a fig tree by the road, he went up to it but found nothing on it except leaves. Then he said to it, “May you never bear fruit again!” Immediately the tree withered.”

Jesus entered the temple courts, and, while he was teaching, the chief priests and the elders of the people came to him. “By what authority are you doing these things?” they asked. “And who gave you this authority?” (Matthew 21:12-27)

Have you ever encountered a new change in leadership – whether a new president or prime minister taking charge of a country or a new boss coming to take charge in your office?

One thing is for sure, you can expect lots of changes as he or she implements new directions and practices under his leadership. That would usually be the first thing to expect. And it would be best for you to adapt to the new changes and not hold on to the old ways!

Today we commemorate Christ’s 3 actions on Holy Monday:
▪️Cleansing of the temple
▪️Cursing of the fig tree
▪️ Dealing with challenges to his authority from the Jewish leaders

All of these actions originate from his entering into Jerusalem on Palm Sunday as King of the Jews.

Yet the surprising thing about Jesus for the Jews was not that he began by leading the fight against the Roman occupation. Instead he proceeded straight towards the Jewish temple to clean house. Relying on God’s commands, he started by transforming the wrong practices there.

He followed this up by setting new expectations for right living by cursing the fig tree to death for not bearing fruit. In this he is telling the entire nation that they are expected to meet up to God’s standards or they would be judged.

Finally, he dealt with all opposition to his rule by putting all his detractors in their place. He will not compromise on the mission and dilute the authority that God has placed on him.

The same is true for us today.

We should not be surprised that our Lord’s first action in our lives is always to cleanse us and make us right. This is the only way for us to be ready and prepared to live in his new kingdom. Otherwise we would pollute the new world that God has created… and he would not allow that to happen.

Let us then, at the beginning of Holy Week, set our lives right with God by responding to His Spirit’s work in our lives today. We can do this by aligning ourselves to his word and choosing the right priorities for this week. For judgment always begins with God’s household before it extends to the world (1 Peter 4:17).

Have a blessed week ahead🙏